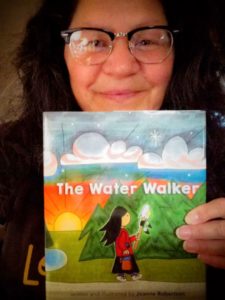 Robertson, a resident of Goulais River, based her book on the water walks that she’s taken part in over the years alongside Josephine Mandamin, who began walking to raise awareness about the health and wellbeing of water sources some 15 years ago.

“Awards and recognition are a way of moving the message forward,” Robertson said. “I feel proud that I got to use my gifts to raise awareness about water in this way.”

The two became friends when they met up at Algoma University two years later.

Since then, Robertson has been instrumental in carrying out a number of water walks with Mandamin, taking them from the four oceans to the St. Lawrence Seaway to all five of the Great Lakes.

Robertson – who tracked the buckets of water along those walks by GPS – assisted with Mandamin’s final water walk last summer.

Read the full story on SooToday.com.